We hadn’t imagined slogging up hills in Croatia. We thought we’d be cruising along the Adriatic, hopping between islands, and stopping off at beaches for refreshing swims. After the Alps, Croatia was meant to be The Holiday.

It was a shock to discover, sat in front of online maps in a cafe on a rainy day in Slovenia, that we’d have almost 1,000m to climb, one mammoth hill, on our first day in Hrvatska (as Croatians call their country).

But it was a hill we had to get over. It separated us from the beautiful Adriatic coast which we’d then follow all the way to Greece.

Here is a better representation of what was in my head:

And it wasn’t any hill. It cruelly and repeatedly hid 10% gradient stretches behind blind bends.

Even with fresh morning legs, our speed became painfully slow, barely faster than these guys.

At one point, my wheels stuck to the road as if the tarmac was melting back into tar. Had we nudged something out of place the one time we’d cleaned the bikes? Did the tyres need pumping?

Eventually, I realised it wasn’t the bike; it was me. My legs didn’t have the strength to move me any faster. If I wasn’t careful, I’d be going backwards and would have to brake on an uphill.

At times like this, my mind had to step in.

Things I told myself to get up the hills

1. You CANNOT give up. You will look stupid pushing a bike up a hill.

Most of the time, I annoy myself worrying about what other people think of me.

But when my legs were screaming and lungs cursing me, I found having an ego to be quite useful.

If Matt wasn’t giving in, I wasn’t either.

If a car was behind, I pushed down with extra force, exerting myself for strangers I’d never see again.

2. You’re in the Tour de France. Bring home the gold!

Before cycling across Europe, I’d never watched more than perhaps a minute of the Tour de France. But on that Croatian hill, I was in it, being wildly cheered upwards by crazy fans.

Again, it was an ego thing and quite hilarious given the reality.

3. Your family is waiting for you at the top of the hill. Don’t let them down.

The cute faces of of my nephews and nieces! Hey, Mind, that’s a cheap trick … but such an effective one.

Whenever I came across a slogan about cycling (usually on posters in other cyclists’ houses or on cycling websites), I wrote them down and often found myself repeating them like mantras on hills.

Here are a couple of others that stuck:

It’s only a hill, get over it.

The race is won by the rider who can suffer the most.

5. You only have to get to that tree*

This goal-setting was inspired by Touching the Void – a gripping film based on the true story of a climbing expedition that goes horribly wrong. In an attempt to get back to base camp, climber Joe Simpson faced the daunting task of having to crawl over snow and glaciers with a broken leg, severe dehydration, and frostbite.

One of the strategies he used to motivate himself was to pick out an object in his line of vision – a crevasse, a rock, or any piece of ice that somehow distinguished itself from all the other ice around him – and aim to reach it in twenty minutes. When he got there, whether within the time limit or not, he chose another object and reset the challenge.

As well as aiming for objects, I sometimes told myself to push down a certain number of times before even contemplating a rest. “Fifty pedals and you can have some water.” When I’d done the target number, I usually found I didn’t want to stop because I’d got into a rhythm.

At other times, it was a song or poem that kept my legs spinning. Bohemian Rhapsody and If were my go-tos, both being long enough to distract me for ages as I usually couldn’t remember them.

6. Pretty much anything else, truths or lies, that gave me hope and made me believe the pain would be worth it

This’ll be the last corner

The views are going to be amazing

It’ll be all downhill to the sea after this

You’ll be lying on a beach this afternoon

So there you go. Looks like I turn into an ego-obsessed, Freddy Mercury wannabe on hills.

What gets you up them? 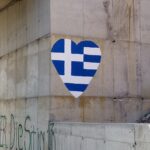 A Cake Knife? How much?! Why We Got Married in Greece: Part 1 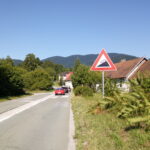 Mind over Metal: How I Got Up Hills on a Tour Bike 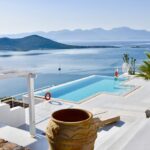 Why We Got Married in Greece: Part 2 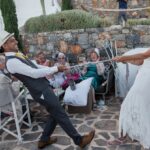 Want a Unique Wedding? Read This for Inspiration!