In May 1941, Germany launched the largest airborne invasion in its military history. It was on Crete, an island approximately 42 times smaller than Germany.

Part of the attack unfolded dramatically across the sky and in the fields around Souda Bay near Chania in western Crete.

For our first two nights on Crete, we stayed in an Airbnb overlooking Souda Bay. We couldn’t have been sleeping more amongst ghosts if we’d tried. 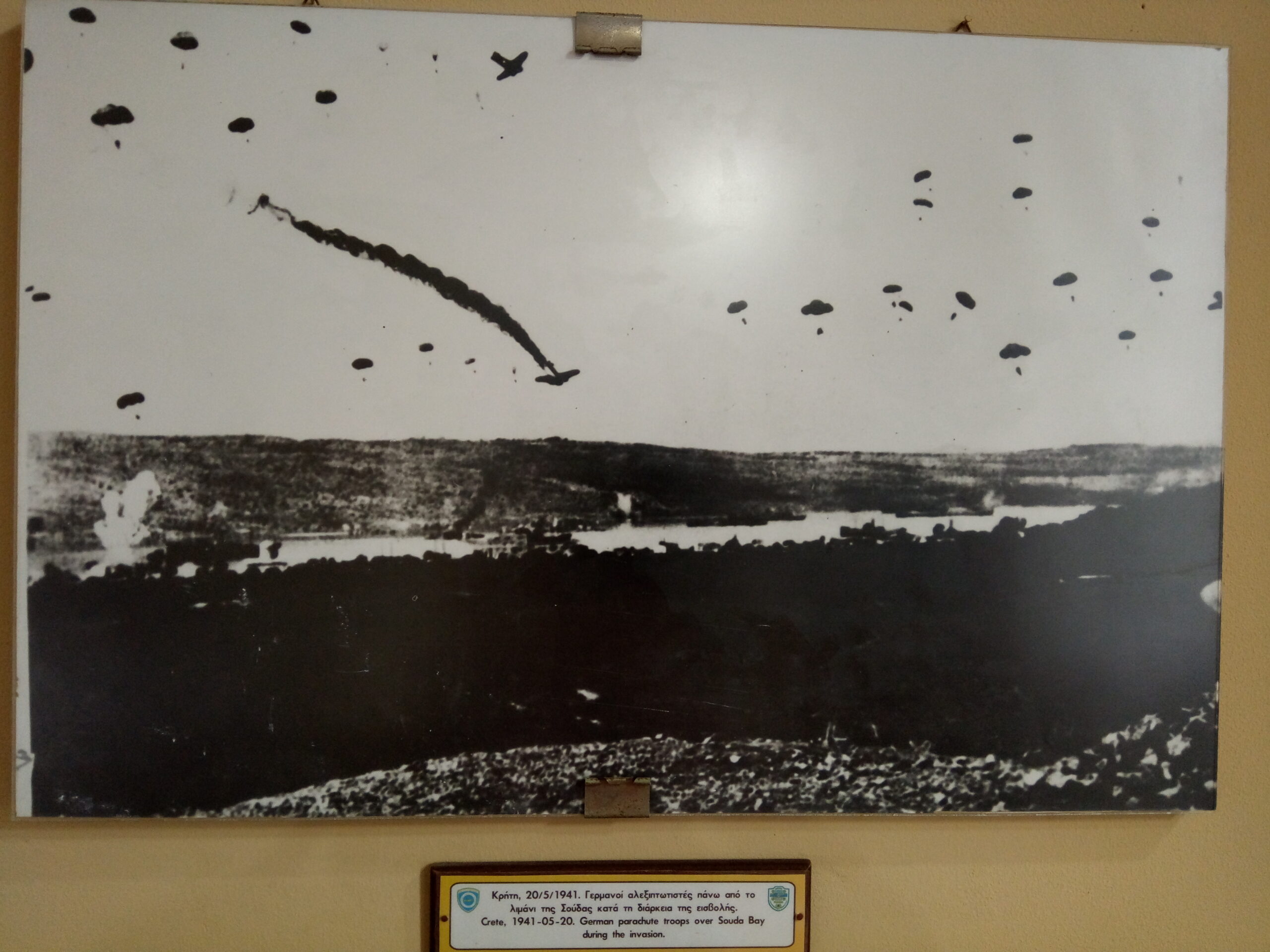 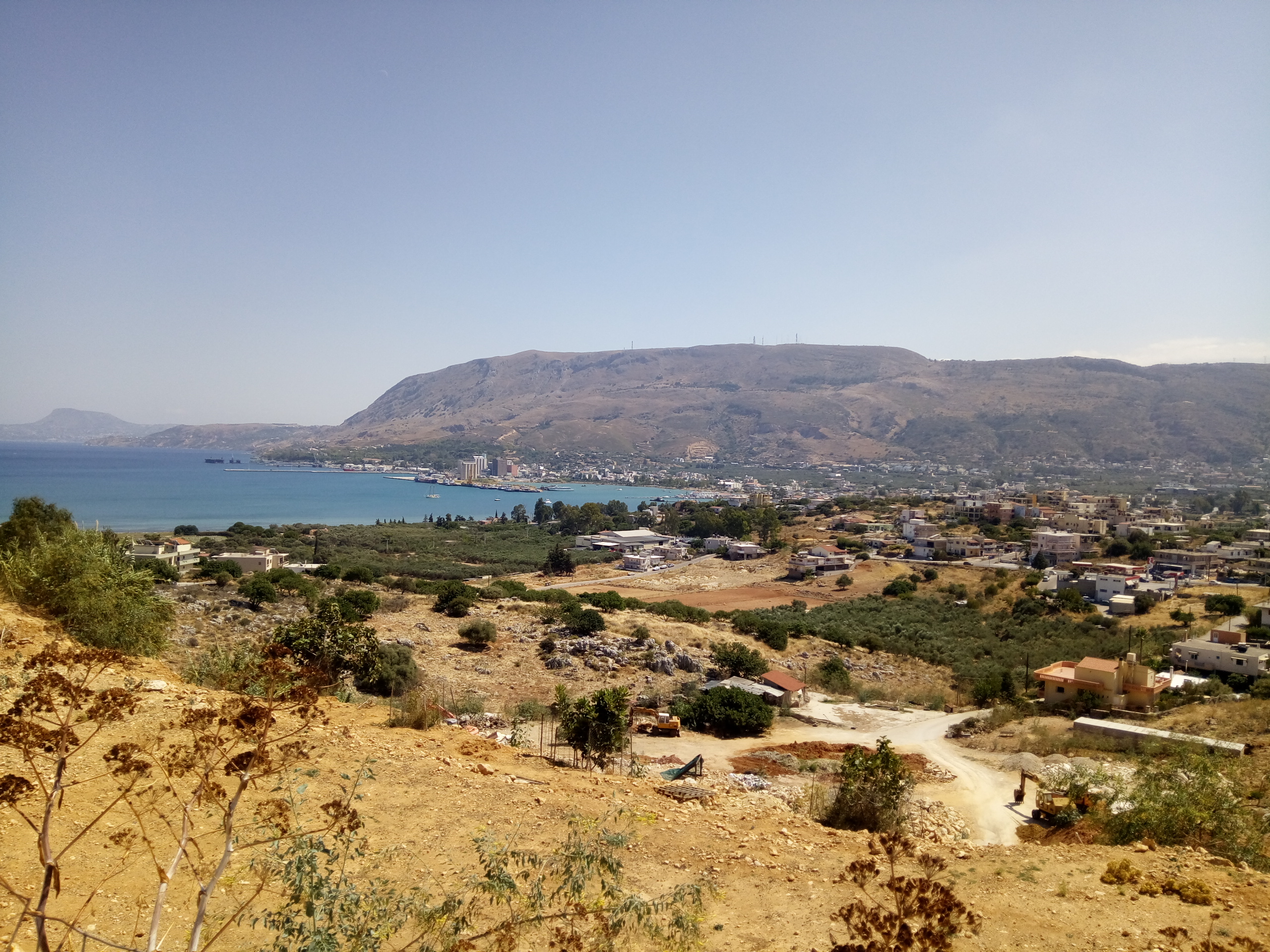 In school history lessons on World War II, I was taught about the home front, Germany’s invasions of northern Europe and the Soviet Union, the Japanese attack on Pearl Harbour, and the retaliating atomic bombs. But I had no recollection of teachers talking about Greece. Even in my adult life, it wasn’t until we were staring at the rows of nameless graves in Suda Bay’s Commonwealth War Cemetery that I became aware of the blood that had flowed on Crete in the twentieth century.

My ignorance about thousands of people from various countries, including my own, dying in Crete during the Second World War shocked me. The only comfort was Matt’s admittance he hadn’t heard anything about it either.

The evening following the cemetery visit, instead of casually browsing tourist leaflets in our apartment, I became obsessed with finding articles about the Battle of Crete online and slowly assembled answers to some of my questions. At this point, Matt worried I might start planning future holidays around the locations of all Second World War cemeteries.

Why was Crete of interest to other countries?

By May 1941, Germany had occupied vast areas of Europe (Czechoslovakia, Austria, Poland, Denmark, Norway, Belgium, the Netherlands, France, the British Channel Islands and mainland Greece) but it didn’t have Crete, the last free Greek territory. It was like having a Greek salad without the feta. Crete would give German forces access to the entire eastern Mediterranean.

The British had had troops stationed on the island since 1940 when Italy attacked Greece. For them, Crete was a base from which to reach the Balkans.

What was Germany’s plan?

To deploy hundreds of planes and gliders to drop paratroops near three airfields on Crete in order to secure supply routes.

Who fought for Crete?

The Allied forces – predominantly Britain, New Zealand and Australia – together with Cretans, although many Cretan men were still fighting on the mainland.

Strengths and weaknesses of each side?

As Germany occupied the mainland opposite Crete, it could supply reinforcements more easily than the Allies and had better access to heavy machinery.

The Allied forces, however, had almost five times more men on the island (more than 42,000 soldiers) and knew Germany was planning to attack thanks to decrypted German messages.

Like the Scots proved at the Battle of Bannockburn against the English in the 14th century, numbers didn’t guarantee success. Despite heavy German casualties, Allied communication errors and German reserves allowed Germany to capture Maleme airport in western Crete, and after 12 days of fighting, Germany secured a foothold on the island.
[Information from: https://nzhistory.govt.nz/war/the-battle-for-crete/overview].

Over half the Allied forces were evacuated and the remaining men surrendered or went into hiding.

Crete went on to be occupied by Germany for almost four years.

The logical next step in trying to understand Crete’s history was a visit to the Maritime Museum in Chania.

When I suggested it, Matt looked as freaked out as this fish did, which we found at the museum in a room crammed with shells and other stuffed fish with freaky googly eye stickers:

Perhaps one day everything except humans will be inside glass cabinets. When I was last in London, one museum had a nature exhibition with images of trees projected onto walls. All I could think of were the lyrics to Joni Mitchell’s Big Yellow Taxi.

Other rooms in the museum teemed with model boats and displays covering over 5,000 years of Cretan history. It was somewhat overwhelming when we’d arrived an hour before closing.

I scanned a few rooms and got the most superficial of impressions of what Crete had been through – slavery, catastrophic earthquakes, tsunamis, millennia of wars, epidemics, pirate invasions, and over four centuries of Venetian rule followed by more than two hundred years of Turkish rule. It was no wonder Cretans had a reputation for being hardcore.

Then I made a beeline for the exhibition on the second floor.

A paratrooper’s helmet, a shiny German teapot, a faded badge from the Maori Batallion, a frayed cream and beige wedding dress that had been knitted by a bride from the silk cords of a German parachute for her wedding in October 1942. I thought it strange Germans had brought a teapot, of all things, to battle and that men from New Zealand had travelled halfway across the world to fight for a country that had little to do with their own. I struggled to imagine what it might have felt like jumping out of a plane into flying bullets or looking at a sky of soldiers descending onto your homeland like locusts. But it was the wedding dress that kept me at the glass as if a thread of it had come loose and was wrapping itself around my legs. Who was Ms. Adriani D. Antonakaki who married on the same island in the same month that our wedding was planned for? Was she madly in love? Did she manage to laugh and dance in her parachute wedding dress? And for how long did she get to share a life with her new husband?

It’s strange when you’re far from home how quickly you can be yanked back to it. I lingered in front of two tattered and framed British flags – one from a vessel that evacuated troops to the Middle East and one from a boat that sunk in Souda Bay.

Then I read a British newspaper. Its main story on May 21st 1941 led with the title: ‘Crete: Situation Well in Hand, Says Mr. Churchill’.

In the bottom corner of the page, a woman haughtily raised a small glass towards her lips. ‘Of course, good wives, like most other things, are not so easy to come by as they were,’ read the advert, ‘but there’s still VP British Sherry, thank goodness – and that’s worth the little extra trouble to get.’

War ravaged the world but the Germans still drank tea from teapots and the British were being told everything was OK and their sherry supplies were secure.

It was the photographs that revealed the cruelest truths though: smiling German paratroopers in an aircraft heading to Crete, unaware they’d soon be diving into a nightmare; a parachute entangled in the lower branches of a tree, the canopy a hanging shroud to the body splattered beneath; British troops at home loading provisions onto a warship. ‘Don’t get on!’ I wanted to yell at them. ‘You have no idea what’s going to happen!’ It was a good job they didn’t.

As for the Cretans, they were the courageous heroes. The museum proudly displayed the sticks, knives, and guns civilians had used to attack paratroopers. Crete may have fallen, they said, but we’ll never surrender. And they didn’t, resisting German occupation until it ended in the spring of 1945.

But civilians also paid heavily for their resistance. A particularly chilling photo showed a soldier standing in an olive grove with piles of bodies at his feet. The massacre of the villagers of Kondomari was just one story in a book of tragedy.

In addition to the deaths of 1,700 Greek, Commonwealth, and Allied soldiers, more than 6,000 Germans were killed or wounded in the Battle of Crete and an estimated 4,000 to 7,000 Cretan civilians died during the German occupation. What sense was there to any of it?
[Data from: https://nzhistory.govt.nz/war/the-battle-for-crete/overview]

It would have been impossible to have guessed that history from the happy faces sat at the terraces in the harbour through the museum’s windows. It would have been impossible to have known what had transpired on the same land, under the same blue skies, having walked the streets of Chania early that day, past book shops selling German translations of Greek myths and brushing shoulders with masses of German-speaking tourists.

I found Matt in the war machines room pushing buttons and pretending to man a submarine. He didn’t understand my fascination with the battle and I felt equally confused about his enthusiasm for the surrounding metal but I peered down a telescope for a photo as instructed before suggesting we went for coffee. We’d risen early to cycle over the hills to Chania, had pushed our bikes down every narrow street the Old Town had flaunted, had followed the peer to the much-photographed lighthouse, and had found the Venetian dockyards and Ottoman mosque. We’d also cycled out to the beach and up to a viewpoint above the rooftops, had tracked down a vegan restaurant, and had visited two museums. Our energy levels and capacity for sightseeing were at their limits and we still had to pedal back to Souda Bay to sleep amongst the ghosts.

Then again, on what day on our journey from England to Greece hadn’t we fallen like rocks into bed?

How to Sunbathe in CroatiaThe Battle of Crete & The Fiery CretansWhy We Got Married in Greece: Part 2Want a Unique Wedding? Read This for Inspiration!
Facebook Instagram
We use cookies to ensure that we give you the best experience on our website.